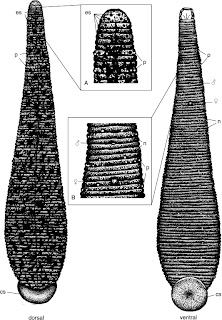 Bill and Carol Ott found a huge leech in a ditch in their backyard in Alloway New Jersey, brought it inside and cared for it. That's a story enough in itself!! "We're just curious people," Carol Ott said.

Beth Wirchansky, a student of Dan Shain's at Rutgers, figured out it was a species new to science, and described it as Haemopis ottorum. Through molecular phylogenetic methods, Wirchansky and Shain corroborated its uniqueness and that its closest relative is Haemopis terrestris.

For the rest of the month, there is a display devoted to Haemopis ottorum, including live specimens, in the lobby of Rutgers-Camden's Science Building!

Congrats Beth.
Posted by Mark Siddall at 6:24 AM