Leeches and their Playmates

Sometime before May of 2011, one-time Playboy Playmate Yvette Vickers passed away. Her mummified body was found at her home in Benedict Canyon, CA. Vickers was well known as the female lead in the Gene (not Roger, his brother) Corman cult classic Attack of the Giant Leeches.

Playboy Playmate Pamela Anderson has had her own experience with leeches, as she described to Colin Ferguson in 2008, blaming them for a series of scars on her left shoulder, but admitting that she's lied about it her whole life and she forgets.
Posted by Mark Siddall at 7:12 PM No comments: 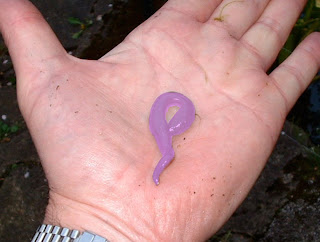 Malaysian news reports that a Sumatran homeopath claims to have cured breast cancer in many women with the application of leeches.

A bit lacking in the scientific method I am afraid. "I have not kept a record of the numbers but I think I have treated hundreds of women over the years and most of them were cured," Ismail said.

While I am highly skeptical, there is a kernel of truth. Most leeches have an antistasin in their saliva. It is one of many anticoagulants. This particular protein acts by preventing factor Xa from converting prothrombin to thrombin (thus preventing thrombin from converting fibrinogen to fibrin, and so preventing clot formation). Turns out that almost all Xa inhibitors, even those from hookworms have anti-tumor-metastisis functionality because they prevent a new tumor from creating its new blood supply (angiogenesis).
There's even a published research paper demonstrating effectiveness against lung cancer metastasis.
Posted by Mark Siddall at 6:42 PM No comments:

Nasty MDR Aeromonas from a leech bite. It was only a matter of time.

A 56 yr old man who had leeches applied following facial reconstructive surgery picked up from leeches that were applied an Aeromonas infection that proved to be multi-drug resistant. Ampicillin was used as the initial prophylaxis and later even cipro couldn’t beat the nasty bug back. The flap tissue graft went fully necrotic and failed requiring repeat of the surgery 8 months later.

Given the severity of the outcome for this patient, it is unfortunate that the report, no doubt, continues the insufferable errors regarding the identity of the leech and the diagnosis of the bacterium. The leeches came from a leech supplier. It's already been shown that the leeches universally supplied by commercial outfits are Hirudo verbana, not Hirudo medicinalis. And it's also recently been clear that while the resident crop bacteria in Hirudo medicinalis, is in fact Aeromonas hydrophila, those in in Hirudo verbana most certainly are not; they are Aeromonas veronii.

The implications of these taxonomic identity errors are not trivial. Anyone looking for MDR Aeromonas hydrophila and not finding it in the natural environment could end up scratching their heads – because they’re looking at the wrong bug – the causative agent in this nosocomial leech case was assuredly Aeromonas veronii.

Widespread global use of fluoroquinolones means these antibiotics have been put out there in natural water areas just through flushing. Aeromonas species in leeches are also found living freely in those habitats where they are being exposed to dribbling, but selection-effective quantities of the antibiotics. Since every commercial leech operation needs to replenish its supply of Hirudo verbana from Turkey (as implied in the report), they are all going to bring this nasty bug with them.
Posted by Mark Siddall at 9:38 AM No comments: 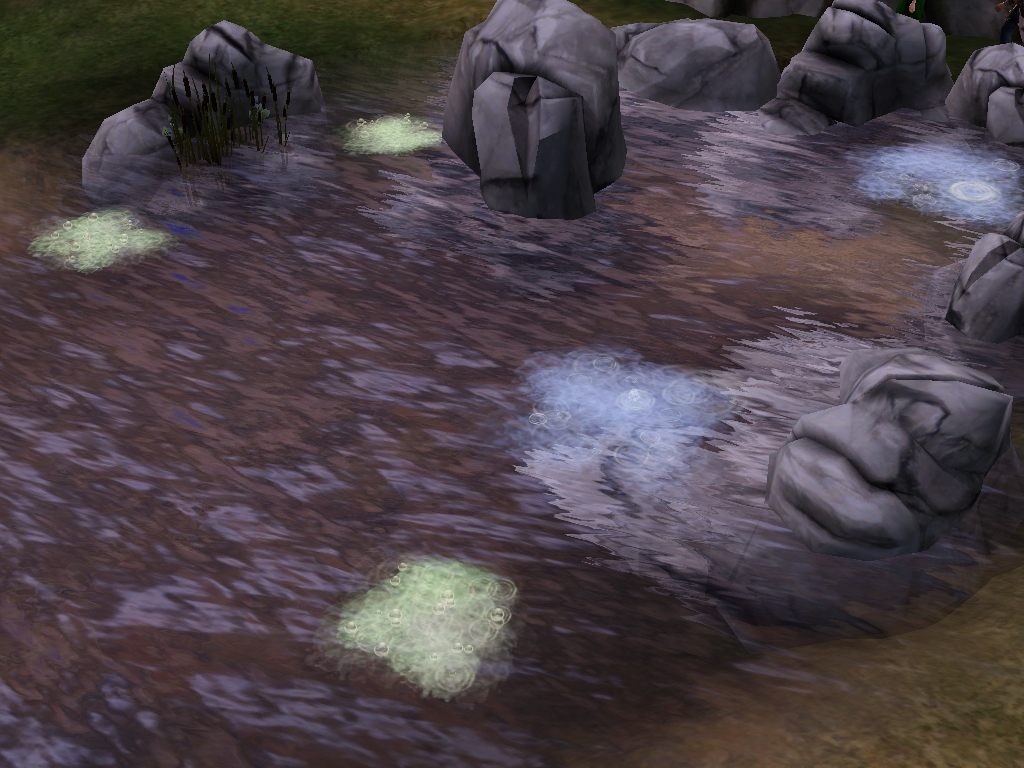 battle a witch or... collect leeches if your Sim is a physician! You can look in the ocean and the river for green spots with bubbles and collect them yourself, or buy them from the village store.
I'll ignore, for now, that leeching was more of a post-Enlightenment phenom than it ever was a medieval one.
Posted by Mark Siddall at 12:15 PM No comments:

Mixed messages from science reporting on a whole bunch of news webpages that just blithely copy each other.
E.g.,
"A new study, which will feature in the International Conference on Biotherapy being held in Los Angeles, has established that using maggots, leeches, and intestinal worms as an alternative to the pills may cure infections and allergies."
"science is beginning to back up their anecdotal claims that maggots, leeches and intestinal worms may be effective in the fight against everything from irritable bowel disease to allergies and psoriasis"
"the use of leeches, maggots and parasitic worms can help cure everything from irritable bowel syndrome to common allergies"

HOWEVER... while leeches have been approved as a medical device by the FDA, it's got nothing to do with infection, allergy, IBS, or psoriasis. Their use is purely mechanical removal of congested blood in tissue that need time for the restoration of venous circulation. End of story. Nothing magic.

Yeeesh.
Posted by Mark Siddall at 7:43 AM No comments:

Leeches and the Opera

There's been quite a lull in the availability of leeches in the news in recent months, but they have once again reared their awesome anecdotal heads in the story of famed blind tenor Andrea Bocelli.

I had the honor of an impromptu visit from Bocelli a few years back. He was in New York performing and was brought by my office in the course of a behind the scenes tour. Funny, though I knew of his work and stunning range of voice, it had escaped me that he is blind. Regardless, while his companion showed a keen interest in our wormy jars of live bloodsuckers, Mr. Bocelli expressed a revulsion (however mild) that I thought was a bit odd.

A recent news article reveals that doctors tried to treat Bocelli's congenital blindness with leeches when he was about 12 years old. To no avail of course.

Posted by Mark Siddall at 7:45 AM No comments: 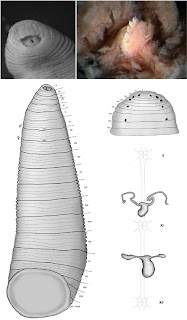 A new genus and species of leech, Tyrranobdella rex Phillips et al. 2010 with enormous teeth was described in the journal PloS ONE on Wednesday of this week. Found feeding from the nose of a 9 yr old child in the upper Amazon by Renzo Arouco-Brown of the School of Medicine at the Universidad Peruana Cayetano Heredia, this new T. rex is known from 3 nasopharyngeal cases, and may well be the first leech species for which Homo sapiens is the type-host.

Phylogenetic work in the publication demonstrates that T. rex is part of a larger evolutionary group of mammal-specific endoparasites, the Praobdellidae, which includes the terrible ferocious leech (Dinobdella ferox) from Asia as well as African and Mexican pests. Mucosal leech infestations by members of this family typically involve the naries, pharynx and hypopharynx, though more alarming mucosal infestation sites are noted by Anna Phillips of the American Museum of Natural History and her co-authors. While leeches are not typically thought to be significant parasites of humans, praobdellid leeches like T. rex have been known to cause life-threatening conditions that range from choking to severe anemia and even death.

In addition to Phillips and Arauco-Brown, authors of this new and formidable T. rex include Mark Siddall and Alejandro Oceguera-Figueroa, also of the American Museum of Natural History, Gloria P.Gomez of the Department of Microbiology at the Universidad Peruana Cayetano Heredia in Lima, María Beltrán of the Enteroparasitology Laboratory at the Peruvian Public Health Center, and Lai Y-Te of the National Taiwan University in Taipei. The research was funded by the the National Science Foundation (DEB-0640463), the Stavros Niarchos fund for Expeditionary Research, a
Theodore Roosevelt Memorial Grant, and a CUNY Science Fellowship.
Posted by Mark Siddall at 6:43 AM No comments:

In honor of the International Year of Biodiversity, my good friend and colleague Susan Perkins established a blog that designates a quaint quotidian critter as Parasite of the Day, for each and every day of 2010.

By way of adding to his contribution, please find below here two additional pics of the beautiful frilly leech: 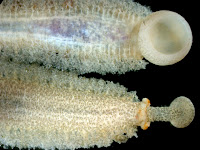 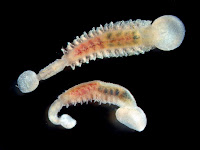 Posted by Mark Siddall at 6:35 AM No comments: 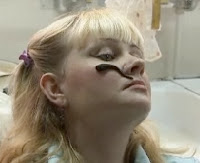 A recent video piece from Reuters showcases the "International Leech Center" in Udelnaya, outside of Moscow. Alas, and uncritically, the piece gives voice to the local belief (and one that prevailed in European medicine the 1800s) that leeches are a cure-all. Among other things, we are told that they "boost the body's immune system" and "the level of endorphins". I can't find any scientific evidence of (or even studies on) the latter. And while it is true that leeches can induce an immune response, it typically is not a pleasant one. My own exposure to North American medicinal leeches induces what appears to be a delayed-type immune response leading to massive swelling in the afflicted extremity, peaking about 72 hrs after the bite.
Posted by Mark Siddall at 6:54 AM No comments:

Anna Phillips (my student working on medicinal leech diversity) continues her considerable efforts at educating the youth of this nation on the beauty of leeches. The Mount Airy News covered her visit to J.J. Jones Intermediate School in Anna's own home town. Locally she has been involved in the after school programs here at AMNH and she also teaches as a substitute in the science program at the Spence School.
Posted by Mark Siddall at 6:41 AM 1 comment: