As an undergraduate student taking Sherwin Desser's JZM252 parasitology course, I was fascinated by the nummber of "worm-in-the-eye" stories with which he regaled us. Loa loa, Onchocerca, Alaria, bot fly larvae, Toxocara (like Baylisascaris procyonis featured in an episode of House)... all potential eye parasites... ugh. 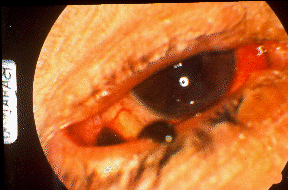 I have often shown the image at right in public presentations about leeches. If you look closely you can see a Dinobdella ferox peeking out from behind someone's lower upper eyelid and it's back sucker holding onto the eyeball itself (the eye is upside down). This was sent to Gene Burreson by a physician in India many years ago, and it never fails to first confuse, and then disgust, a lunch-time scientific audience!
The tribulations of people with leeches in their eyes continues. In regions of the world where the terrestrial leeches abound, like Australia and in the wet forests of Madagascar, leeches in the eyes and ears is all too common. Getting aquatic leeches in an eye, while less common, is perhaps more terrifying in light of the larger size of these "medicinal" leeches.
The Australian story is remarkable for this misperception: "Dr Fogg says tweezers were not an option as simply pulling the leech off could leave its head lodged in the eyeball, leading to infection." Even if leeches had a head, which they do not, for this to be true, the head would have to embed, which it does not since the leech would be unable to suck blood without the seal it makes with its oral sucker.
We might have Hollywood to blame for this. In The African Queen, Humphry Bogart's character Allnut (a Canadian, I might add), when he emerges from a swamp covered in leeches, declares to Rose (Katharine Hepburn), "No, no, don't touch 'em, don't! Salt, Rosie! ... You pull 'em off but their heads stay in! Poison the blood! Get the salt... If there's anything in the world I hate, it's leeches. Oooh, the filthy little devils."
If you do get a leech in your eye, salt water will get it out. It will have to be saltier than your tears, so it's likely to sting, and you'll want to flush your eyeball with water afterwards.
Every photograph of a leech in an eye is one where someone ran for a camera first instead of getting the thing out!
Posted by Mark Siddall at 7:00 AM